July 08, 2018
On Wednesday (Happy 4th!) I ran my first 5k since Olive was born. The last 5k I ran was in August last year when I was 20-ish weeks pregnant. My last non-pregnant 5k was October 2016. It was high time for some guidance on training paces, and I went into the race knowing it would be hard with only three weeks of running after taking time off with my hip injury. Turns out "hard" was like the understatement of the century!

I went for a shakeout run on Tuesday night at 8pm in very muggy conditions. I felt sluggish and hoped that it would still somehow translate to a fast-ish time for the race, or at least not my slowest 5k ever. Spoiler alert: I ran my slowest 5k ever.

My plan for race morning was to wake up early enough to dream -feed Olive, grab some food, and get to the race start with enough time to run a warm-up and do some dynamic stretching. What really happened: Olive was wide awake, kicking around in bed, before my alarm even went off. When I tried to nurse her, she refused, happy to just be awake and getting attention. I spent so long trying to get her to fall back asleep that I put myself behind schedule. I left Olive awake on the bed while I hurriedly got dressed, then decided to try to pump because my boobs were full. While I was doing that, Olive started crying so I brought her out to play on the floor. Then Ulla woke up. So much for sneaking out!

I left the house 25 minutes behind schedule. I still needed to register for the race so I parked two blocks away, my run to and from registration my only warm up. I did a few legs swings in the corral to try to loosen my hip but didn't have much time. It was incredibly humid and I was sweating just standing in the corral. I started to think that doing anything besides fun-running was going to be a bad idea.


Within the first half-mile I knew that my plan of running "comfortably hard" was out the window. Despite a slow, controlled pace, my heart rate was in Zone 5 by the time we went through the first mile. This would probably okay for a 5k in normal conditions, but with the heat it felt like way too much. My legs felt like lead and I couldn't get my breathing under control. I walked through the first water stop. Then the course started to climb.


Mile 2 was essentially all uphill, a gradual climb that zigzagged up the side of the river valley. I walked a lot, my first time ever walking in a 5k. My heart rate was still in Zone 5 or high 4, but my breathing felt a little more manageable. We went through a second water stop after mile 2 and I dumped a cup of (lukewarm) water down my back. Despite being so overheated, I noticed that I was starting to get goosebumps. I walked a bit more, then picked up a jog again.

The course ran along the top of the river valley for a bit, then sharply descended back to the start. What had taken us most of mile two to climb took us only a quarter-mile to get down. I kept my pace slow, not wanting to push my luck on weak legs.

I finished in 27:04, my slowest time for a 5k ever. I grabbed some water and watched the top 8k finishers come in just a minute or two after I had finished a 5k (!!!) and then walked back to my car to change out of my sweaty clothes. John got there with the girls, and we unloaded and headed back to the park for the Toddler Trot, which would be Ulla's first race.

While we were waiting, they started to do age group awards, which I didn't even know were a thing! (Seriously, there was shockingly little online about the race, despite it being in it's 18th year.) And, lo and behold, when they called out the top 3 in the 30-39 age group, I finished third!

For Ulla's race, they ran the kids on the grass for a short little out and back. She wanted me to run with her, and made it about 20 feet before she said the grass was "too itchy" and refused to run another step. So that's a big DNF for her first race. But my gosh, didn't she look cute in her little "running clothes"? 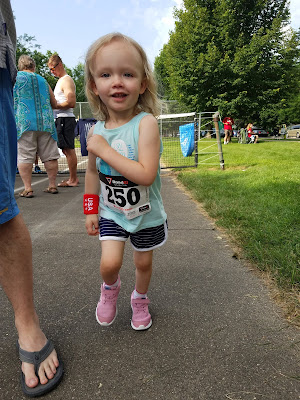 The takeaway: I had hoped to use this race to hone in on some training paces but I know that a 27 minute 5k is not at all indicative of my current fitness level. So I'll wait another month for our next local 5k and try again, hopefully with cooler weather! 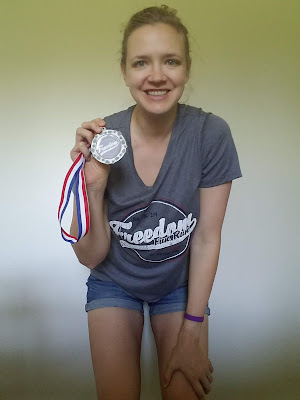