god winks (the story of my treadmill) 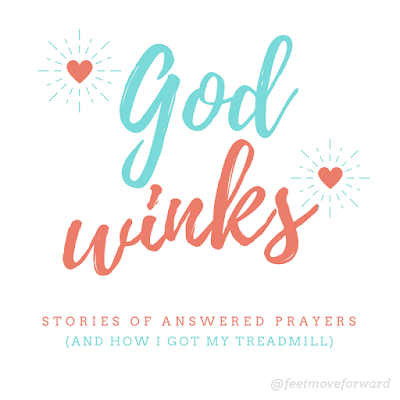 About three years ago, when we needed a second car before Ulla was born, I prayed that we'd be able to find a reliable, affordable car. A few days later, a college friend's sister randomly sent out a mass email that her husband was looking to sell his Toyota Forerunner. We got it for a steal, and it's been our reliable second vehicle for the last few years.

Last summer we bought a hiking pack to carrying Ulla in. It was $300, about double what I wanted to spend. We got home that night and I was doubting our purchase, feeling guilty that it was so much money. The next morning as we got ready for our first hike with it, I pulled out my old hiking shoes and found $348 stuffed inside, money that I had no doubt put there, then forgot about.

This past fall, heavily pregnant with Olive, we started to hunt for a minivan.  (My Jetta wouldn't have been super conducive to two carseats.)  Buying new wasn't an option, and even used vans were well over $10k. So I prayed that God would do what He did when we got the Forerunner. A few days later, our neighbors brought home her late father's van and (no surprise) they were selling it. We got it for under Kelly Blue Book value. And now we have a van.

And now, my treadmill: Once Olive was born it became almost impossible to get out of the house for a run, especially in the winter, especially when driving to the gym, changing, running, and driving home would take longer than the run itself. So I began to shop for treadmills. Decent ones started at $800. Really nice ones were $1300. So I put it on my "not now" list but prayed that God would send me one. A few days later, John called me and told me that his brother was going to GIVE me his hardly-ever-used- $2400-retail treadmill.

When we picked it up from him, I told him how I had prayed for a treadmill and teased my ever-the-agnostic brother-in-law that God had used him to answer my prayer. He laughed and told me that I better not put that on Facebook. So I'm putting it on my blog instead.

And if this stirs something in your heart, here's a disclaimer: Every prayer we pray is not answered in the way we want it. That thinking is something I like to call Vending Machine Jesus. We do not get to push a prayer button and have a chocolate-covered answer drop out of the sky. But I believe that God is a good Father that wants to give good things to His children. So I pray, about anything and everything, and sometimes, like the above examples, things are answered in the exact way I want them.
god talk