April 04, 2014
Today is our three-month anniversary. I mentioned earlier this week that John and I have been working out since March, and I knew when we started that I was in dire need of new shoes. My current pair should have been retired a while ago. My knees will ache after running in them, which is a telltale sign.

Anyway, last night after picking up groceries, when it had just begun to snow huge, wet flakes, we spontaneously decided to hit up my favorite running store, Mill City Running, and buy each other a little anniversary present.

Because my mileage isn't high- and won't be for a while- I told them I wanted something a little "softer" than my beloved Mizunos. So, after several trips on the treadmill, I settled with these beauties. 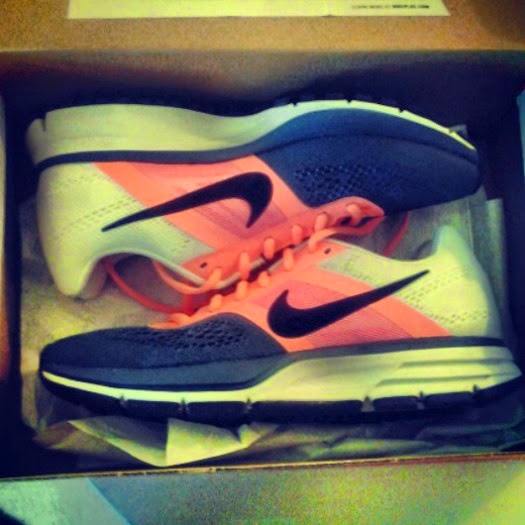 Nikes. I know. But they're really comfortable, and for the brief minute I wore them on the treadmill, it was like running on little pillows. I'm looking forward to taking them on their first real run tomorrow morning. (John got a pair of these but made it clear there would be no running in them.)

Tonight, dinner at home, and an early bedtime. Because we're an old married couple.

How quickly the tides turn!

After my track workout with Minnesota R.E.D on Tuesday, I left thinking I would join some of them for the Rice Street Mile that was run tonight. Yesterday I had 13 miles on tap but decided to break it out to 7 in the morning and 6 later that night. However, after my AM run, I was having a lot of hip pain. Given the fact that I was planning on racing a mile, I figured I'd hit the bike at the gym instead.

As I was leaving the gym, I suddenly felt a sharp pain in the ball of my foot, kind of like a charley horse. It got worse and worse on the walk to my car. I figured it was just a muscle spasm and thought that it would feel better by the time I got home.

After icing and ibuprofen, I went to sleep hoping that I'd feel better in the morning.

Not willing to admit defeat, I packed my running gear in hopes of still making it to the Rice Street Mile just in case I miraculously recovered. I spent all day at work rolling a froz…
Read more

I'm still here. I've been incredibly busy these past six weeks (new job, new apt, lots o' running) and haven't had much time to blog. AND I also don't have Internet in my apartment. I'm currently "stealing" it from the Starbucks across the street.

Rather than bore you with paragraphs about what I've been up to, I'll let some pictures do the talking.

Over the past six weeks I've...

Moved.
I don't have a picture to illustrate this because I was too busy moving to care about taking pictures so use your imagination.Sorry to let you down right off the bat.

Fine, not really. (I should note that this photo was taken after I spent several hours at a wedding reception and then had some beverages to celebrate my aforementioned victory. Benefit of living in a small town #278: News travels fast that you won a road race and people like to buy you drinks. Le Sueur, represent!)

July 09, 2014
Life updates for interested parties:
My Cat Lady Hand My hand is still not healed. The week before last, the skin on my finger literally shed like a snake in one long, thick sheath. So gross and awesome at the same time. However, it revealed some very pink, sensitive skin, and that bothers me more than not being able to bend my fingers. Yes, fingers. I can't make a fist with my right hand, and therefore have trouble gripping, opening, pulling, or essentially fully using my right hand. Time will heal it, allegedly.
Running I haven't run since my disappointing 5k in May, and I haven't really wanted to. Unfortunately, my legs are the only part of my body that I can effectively exercise at this point in time.
Work & Marriage Work is nutso, because we're experiencing a ton of growth, and along with it, growing pains. It's great but uncomfortable, as change has a tendency to be. Also, while I've probably alluded to it in previous posts, John also works here, whi…
Read more