race recap: get in gear 10k

Yesterday I woke up feeling the worst I have in days. Without going into too much detail, it was clear my cold had turned bacterial. Lots of nose blowing, phlegm coughing, and water guzzling.

I got to the race around 8, found parking a few blocks away and got the lay of the land. With twenty minutes until the gun, I went out for a warm up jog. When I got back, the corrals were packed and I tried to work my way up to the front but stopped when it got too crowded to move forward without pushing people.

I spent the first mile bobbing and weaving through a ton of people. (My stats show I passed 498 in the first four miles.) I kept telling myself not to panic, that I had the whole race to make up for it. Besides, I wanted my first mile to be my slowest anyway. It was. 7:34.

The road began to open up and I got a little over-zealous. I don't think I've ever been this happy to be racing. I forgot how much I loved the camaraderie of runners, and hearing the cheers of spectators. 7:07- or "making up for lost time."

After mile 2 (I think) I saw Colleen, Julie and baby Mae and caught a few strides with former TCM coworker Molly, who was running the half. We wished each other luck before I kept moving, settling in to a pace that felt good (without looking at my watch). 7:20

Between miles 3-4, you hit a hillier portion of the course. I did my best to stay relaxed and focused on keeping my stride short and using my arms to propel me. It helped knowing I'd be rewarding with a downhill after I made it up. 7:25

Just after mile 4, two guys passed me that were talking about going sub-7, and one said that they'd have to go now to make it. The other replied that he was feeling okay as they were, but the pace they were moving was faster than what I doing. I debated if I should try to move with them but decided to hold where I was. 7:17

It was at that point that I was comfortably tired and began to dread the minimal, though very real, incline up and over the bridge. It's also the point on the course where the half marathon splits off and continues for their additional miles, and I began to think about my experience last year. 7:20

I actually don't remember passing the 6 mile mark, or really anything besides seeing Colleen, Julie and Mae and seeing Colleen raise her phone to take a picture of me and knowing that it would probably be pretty terrible. I concentrated on moving my feet as fast as possible, and began counting down from 10 in my head, knowing that when I hit zero, I would be done. 6:50 (last .2). 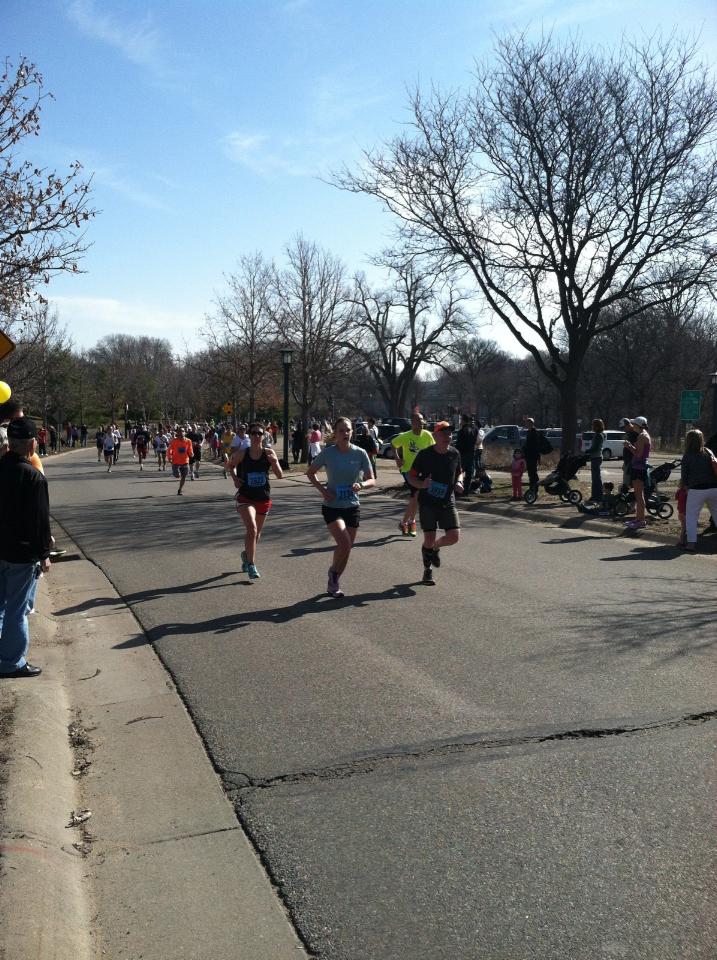 Some thoughts on my first 10k:
So there it is, the story of my first- though not last- 10k.