If you follow me on Twitter or Instagram, you pretty much know how this all went down. If you don't, settle in because I'm starting with The Day Before the Marathon.

Saturday
The Day Before the Marathon kicked off with coffee and friends at Ann's!


From Ann's I went to the expo to pick up my packet and peruse the expo. I practiced restraint and only bought one shirt, mostly because it had Minnesota on it.

Saturday night is where things get crazy. I went to The Bachelor Farmer for dinner and decided to carb load with their gimlet (which is seriously the best I've found in this city) and popover with honey butter. Top 10 favorite foods. EVER.

From dinner I went to an art party on Harriet Island and continued carb loading with wine and beer. Blame it on the mood of the party- or all the carbs I had- but I felt compelled to take a mirror self-portrait. Savor it, friends, because it doesn't happen often. 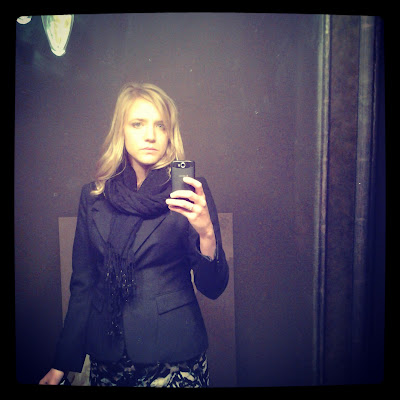 I told myself I would stop imbibing at nine but it was probably more like ten. I was in bed by 11.


Sunday- RACE DAY!
I woke up at 4am in a panic. I literally have never prepared so little for a marathon and the gravity of covering 26.2 miles (with a hangover) freaked me out.

I got out of bed, drank a ton of water, took ibuprofen, and started to assemble my race day outfit. Because obviously I wasn't going back to sleep.

I did manage to lay back down and rest but by six my alarm officially went off. Despite having been up mere half hour prior laying out an outfit, I found myself staring at my clothes on the floor, debating what I should actually put on.

The temp was 29 degrees and my pace was going to be slow. I bought running tights on a whim from Target the night before, but wearing them would be breaking the Cardinal Rule of marathoning: Don't try anything new on race day. Never one for rules, I put them on under my shorts.

My dad picked me up and we found ourselves in Corral 3 in no time. 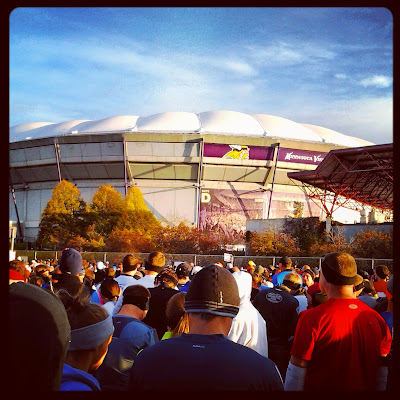 Roughly 10 minutes after the gun, we crossed the start line.


The first miles flew by as we trotted along between a 11:30-12 minute pace. The course wasn't as crowded as I thought it would be and it gave us plenty of opportunity to talk (and take pictures).

I felt good and was happy to just be running with my dad. We'd chat with people as we passed them- or they passed us. Either way, we were at Mile 10 before we knew it.

My decision to wear my new capris, though, was starting to wear on me. Literally. Chafe city. In the Worst Place possible. I pulled off into a porta potty at Lake Nokomis and took them off, which also involved removing my shoes. It was the fastest I've ever changed.
I caught up with my dad just before the half and we continued moving along. We called my brother and sister and put them on speaker to give them an update on how things were going and I snapped this of my dad to prove he was still alive. 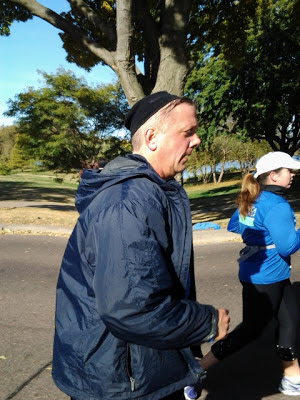 We finally saw our family around mile 15.

I was definitely enjoying the fall colors along Minnehaha Parkway.... 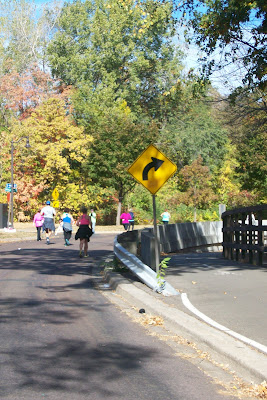 But then we came across this!

The BEST SPECTATORS EVER! Ann and Jay were out there for like 2.5 hours dancing their butts off. I had to stop to document this. 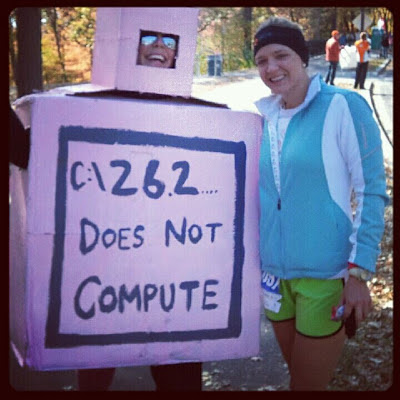 It was shortly after this that our pace started to slow even more and I noticed my dad grimacing. I asked what was up and he told me he had hernia. Furthermore, he's had it since JUNE and didn't want to get surgery because then he wouldn't have been able to run. Hats off, Bill. That takes guts. Literally.

Dad was starting to hurt big time and we were definitely doing more walking than running. I tweeted this picture with the caption Dad hates life. 23 because seriously, doesn't he look miserable? 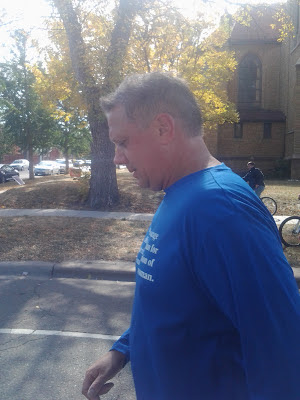 But then we saw this and morale improved! 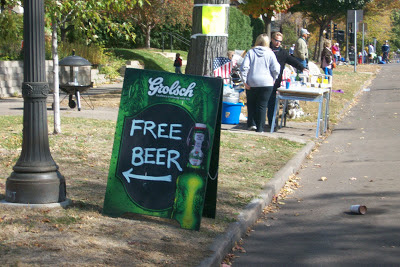 Soon enough, this:
And then this happened: 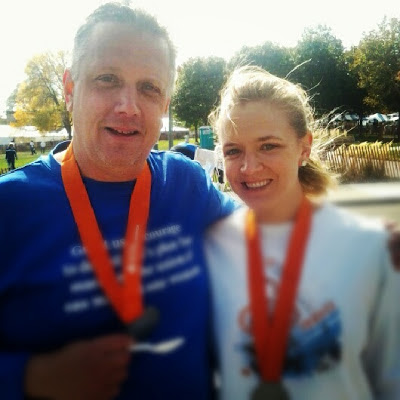 So four years after our first marathon together, we did our last. Dad says he's done with marathons for good.