Blue belongs to my friend John. On Monday night, John told me that Blue hadn't pooed for four days and had stopped eating and drinking. After a very expensive vet visit earlier that day, they didn't know what was wrong with him and recommended a surgery which John couldn't afford. If Blue didn't poo by the next morning, he would have to put him down.

I told John I would pray for Blue and his poo- and then promptly forgot to after getting off the phone that night. I remembered the next morning, though, and quickly prayed this very crass, to-the-point prayer: God, you know what's wrong with Blue and you can fix him. I pray that whatever is blocking him just comes spraying out of him.(I was picturing explosive diarrhea when I was praying.) Thanks God! Love you.

A few hours later I got this text from John: Hannah! Blue might be doing better, he pooped all over the stairs. It is sprayed everywhere. If he keeps pooping he won't have to go back to the vet!

To which I responded: LOL! I literally prayed for it to spray out of him!! Sorry I didn't specify outside! PTL!

And later:
John: Blue is way better! He is jumping around and back to his normal self.

Me: See how much God loves you?!

John: He loves me lots.

Then he sent me this picture of Blue testing out chairs on his patio. 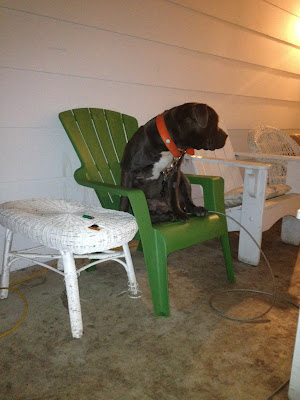 PS- I reposted my India recaps after taking them down for some editing. Read parts I, II, III and the pictures post. Then come down to Le Sueur to hang with me and Ravi for the Keys to Kingdom Living Conference that starts tomorrow!