July 06, 2012
Yesterday while I was at my grandparents' house, the topic of dinner came up. When your meals mainly consist of Meals On Wheels and PB & J,  any deviation is usually a welcome one. I told my Grandpa that I'd bring lunch over the next day (today) and asked him what he'd like.  Meatloaf, he tells me, a dish I have never made, or even thought about making, really.

An all-call went out on Twitter. Google got a workout. Recipes abounded. But then I remembered I hate following recipes. So I winged it.  From what I could tell, meatloaf is a glorified hamburger. Game on.

I had three pounds of hamburger (thanks, mom!) in my fridge so I divided it into two parts, figuring I'd experiment with the first and then make a more "traditional" recipe with the second. In went sauted onions and spinach, garlic, sundried tomatoes and feta cheese.  An egg found it's way in, as did garlic, salt, pepper and a cup or so of instant oatmeal (which turned out to be a pretty decent substitution for breadcrumbs).  I mixed it by hand and formed it into a loaf on a baking sheet. Into the oven it went and I kept my fingers crossed.

Success! It didn't hold together very well but it tasted amazing. I was a little worried about the feta, as none of the recipes I looked at had cheese in them. I didn't know what an hour in the oven would do to it but it worked just like I had hoped. 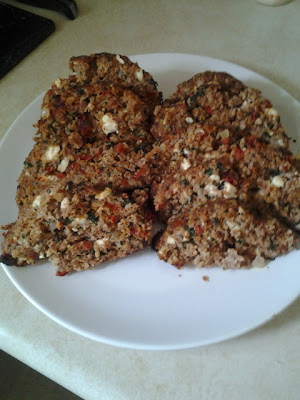 Not sure if my grandparents would appreciate my food experiment, I made the second batch with red pepper, onions, tomatoes, spinach and a dash of tabasco and soy sauce. I also added two eggs and more instant oatmeal. Results? Also amazing. The consistency was much better and I broiled it for the last 5 minutes of cooking time, giving it a nice crust.

Grandpa's verdict? Really good.  He told me I should cube some of it and hand it out to eligible bachelors to show them I could cook. I just might have to try that...