The long version: Yesterday I ran my slowest 5K in three years. Like I mentioned, I wanted to use this race as a basis for my training paces in the upcoming months.

pre-race
I decided to stay at my apartment on Friday night instead of driving down to stay at my mom's, mostly so I could run to Yogurt Lab for my typical pre-race bribe. Yes, run. I told myself that if I wanted the sweet deliciousness that is frozen yogurt, I'd have to get there on foot, which is roughly .8 miles away from my apartment. I jogged there, paid an ungodly amount of money for what was approximately a pound of sugar, and then walked (while eating it) home.

The next morning I woke up with my stomach in knots. I thought it was just nerves and went to make coffee to encourage a little pre-race cleansing. Turns out I didn't even need coffee and spent the next half hour going over a list of everything I ate the day prior, trying to come up with an answer to what would make me so violently ill. I decided it was frozen yogurt or nerves, and hoped that whatever it was had worked it's way out.

I grabbed my coffee and a Larabar and hit the road for the hour+ drive to St. Peter. I didn't feel like eating anything but managed to choke down half a Larabar and a few sips of coffee. I just was not feeling well. When I got to the race site, I headed straight for the bathroom in attempt to quiet my rumbling stomach. (My friend Kat says that it's just a matter of time before every runner poops their pants and we're all just on borrowed time. I sincerely began to worry that my time might be up.)

the race
When the gun went off, I made an effort to not get swept up in the people speeding out and to just run my own race. I checked my watch about a quarter mile in and saw 7:13, which was what I had intended on running.

The people that had started quickly began to slow and I picked them off, soon coming up on the first girl. I thought briefly about staying behind her but knew that if I slowed, it would defeat the entire purpose of this race, which was to determine where I'm at with my fitness. As I passed her, I could hear that her breathing was really labored.

When my watch beeped my mile split, I was shocked to see 6:46. I could feel the pain that is 5K agony but told myself to not worry about it and to just keep running. Mile two was 7:15, my old goal marathon pace.

At mile 2.5 the course began a long, slow climb and it took every ounce of energy to not walk up it. I knew that once I got to the top, it was pretty much a downhill to the finish. The descent, though, did little except tire out my shaky legs and I just hoped to hold on through the finish. I came through the third mile in 7:20

I crossed the line in 21:59, my slowest 5K in years. I did not feel great at all (though there was no barfing). I ran about a mile cool down, running back up the course to cheer on my mom, her friend Heather, and my siblings. My mom ended up running her fastest 5K!

post-race
I had  no idea that they gave awards out so I was pleasantly surprised when they gave me the absolutely cutest medal (a cowbell!), an entry into next year's race and a gift card to a local coffee shop. Very cool! 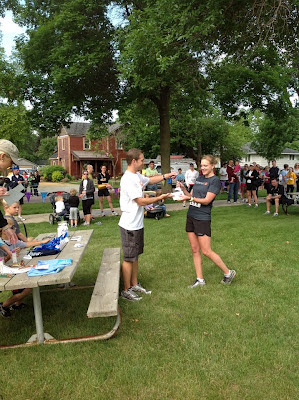 Here we all are post-race. My mom (left of me in the photo) is a big fan of pictures. Settle in, friends, I'm going to show them all.


After our marathon photo session was over, we went to River Rock and had breakfast. They make something called a Spanish Latte and I have no idea what is in it but it's really good. If you're ever in St. Peter, stop and get one. 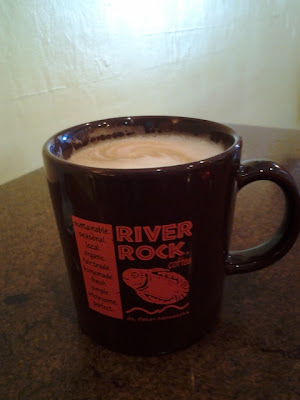 I felt nauseous during breakfast, a feeling that didn't go away all day, even after a two hour nap at my parent's. I got up to try to drive home around 4 p.m. and ended up laying down on the kitchen floor because I was so light-headed. I finally left their house at 7 and fell asleep on my couch when I got home.

Today has been a little touch and go. I felt sick after eating breakfast and lunch. I just had dinner and I'm feeling okay. Knock on wood it was only a 24 hour thing. Busy week ahead...