How Not to Win a 5K Race

August 13, 2011
﻿﻿﻿﻿
Okay, as promised, my 5K race recap from the Giant's Valley 5K I ran last Saturday. This is another one of those small town 5Ks. I grew up in Le Sueur, the Valley of the Jolly Green Giant. It's our only claim to fame.
Last year I was the first female with a time of 21:06 so I felt like I had to go back and defend my title.

Pre-Race
I hadn't registered in advance so I got there at 7 a.m. to register and begin my warm up. When I was walking out to my car to drop off my stuff after registering and saw a girl warming up. She. Looked. Fast. Really thin, hot pink sports bra and short shorts, doing drills. If you're doing drills and strides before a 5K, you generally know what you're doing. Mind you this was like an hour before the race started. She was there to win. Eesh.

I ran my warm-up with a friend and then left him to do drills and strides myself. I wanted my heart rate as high as possible before I started running.

The Race
I lined up at the front with a bunch of guys and Fast Girl. I told myself that no matter what happened, I needed to keep the first mile slower and not burn out on the hill. The gun went off and Fast Girl and the guys took off. I stuck with a pack about 20 feet behind and worked my way up the hill.

By the time we reached the top of the hill she had slowed considerably and I was on her heels. And here's where I started running scared. I didn't want to pass her and risk burning out, even though we were running well below my 5K ability. I expected her pace to quicken on the downhill but we actually slowed a bit. I stayed just off her shoulder.

When we hit a flat portion of the course, I pulled up along side of her and asked her what she wanted to run. 19 or 20, she said. We were nowhere near that pace and I probably should've dropped her at that point but I was scared. I thought she was sandbagging and if I took the lead, she'd kick toward the end. Soon enough, her pace slowed even more, giving me no choice but to move to the lead just before the 2 mile mark.

My mom had come to watch me run and was on the course. When  I reached her I asked her for an update on where Fast Girl was and she told me I had half a block lead. At this point my stomach was starting to hurt and I kept burping up almond butter toast that I probably ate too close to the start of the race (lesson learned- allow at least 2 full hours for digestion. Not an hour.). My mom actually got  in her car and started driving along side of me, asking what pace I was running. I knew I was slow but hadn't look at my watch at all since the first mile. I looked down and saw 7:15(!!) for my projected mile pace. Um, what? Then my mom said, "You've lost some ground." and I'm thinking, "Well yeah, cause I'm running marathon pace and I feel like I'm gonna hurl" but instead I sucked it up and started moving faster.

I just concentrated on moving my feet as fast as possible the last 1/2 mile. And I'm not going to lie, I was totally thinking about beating Fast Girl. I knew I wasn't going to PR so I wanted to win and the finish line couldn't come fast enough. I kept listening for breathing or footsteps behind me but they never came. I was the first female across the line in 21:14, 8 seconds slower than last year and 50 seconds off my current 5K PR. I was not happy.

Post- Race
I took off to run a cool down and when I was on my way back, I saw Fast Girl running her cool down and stopped to tell her good race. She said that she was having stomach issues, too. Must be something in the water... 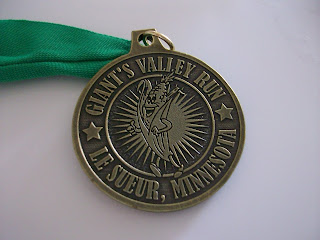 I found my mom at the awards ceremony and she knew I wasn't happy with my time. I asked her about when Fast Girl was closing the gap and she said, "No, I said SHE lost some ground." It's probably a good thing I misunderstood otherwise my time would've been more pathetic.

I did get this cute medal for winning my age group. I should probably mention that Fast Girl turned out to be 16 years old and finished in 21:56.

So lessons learned: Don't run scared. Don't eat an hour before you're going to race a 5K and don't be intimidated by people who look fast. You never can tell.