November 03, 2010
I'm super late in posting this. My tardiness speaks to my level of exhaustedness (is that a word?) and evidence that I ran my buns off, resulting in a 13 minute PR.
﻿


It was pretty cold that morning and when I got to the starting corral, they were all but empty. I went to stretch and warm up inside a nearby building where other runners were waiting, thinking that I could just hop into the corral right before the start. I ended up waiting a bit too long and the corrals were packed by the time I got out there. I actually ended up standing outside of the corral and had to make my way up to the 3:30 group over the first two miles.

The half marathoners started with us so it was pretty crowded until mile 3 where they split off from us. The course for us heading straight up a long, gradual hill where I just concentrated on maintaining an even effort and didn't worry so much about pace.

In my original race plan, I had wanted to stay with the 3:30 group until 13.1, then pick it up for a negative split. However, the pacer for that group had never led a pace group before so my confidence in him was pretty low and I decided to forge ahead on my own.

I knew that there were going to be rolling hills and they appeared in miles 4-8. I actually like hills but when I say that, I mean running up them. I'm not a big fan of down hills, if you'll recall from this post. Long story short, I trashed my quads pretty early and could feel them tightening up.

In my original race plan, I wanted to pick up my pace but with how crappy my legs were feeling, I thought it would be better to just maintain and go for my "B" goal of 3:30 (my "A" was 3:25). Around mile 14, I started chatting with a guy who was running his first marathon and trying to BQ. He needed a 3:45 but was shooting for a 3:35 and asked if he could run with me. For the next 5 or so miles, we chatted about running and small life details. We had been talking for a while when we finally introduced ourselves. His name: Joel.
﻿﻿

Around Mile 20, Joel and I had tucked in with pack of runners. He slowed at a water stop and I didn't see him again.  I'm not going to sugar coat it- I was hurting big time. I was alone on the course except for half marathon walkers (seriously, people? Isn't there a 5K some where? Sorry, that was mean.)  and a few runners that I would occasionally pass.  It was also pretty windy and I was praying that I would catch someone that I could draft behind. No such luck.

My goals at that point became about not walking (Note: I've never not walked in a race, or even a long training run, for that matter) and not running anything over an 8:30 pace.

﻿﻿﻿﻿﻿﻿
The last miles were brutal. With no one with me, it was a total mind game. I was grateful for even the smallest distraction, like the guy standing near mile 22 with a sign that read "High five if you still like running." If I had the energy to lift my arm, I totally would have. My mom was there at a few points on the course but could never get a shot of me coming, just passing or leaving. After reviewing the professional race pictures, I'm still a total failure when it comes to taking a cute one.

Finally, I could see the 26 mile marker (8:18) and found one more gear to push to the finish (last .2, 7:16 pace). All I could think was "You can do anything for one minute" despite the fact that I had been repeating this phrase over the last 45 minutes. But finally I was done. 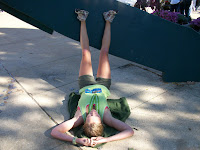 So there it is. Now I am taking a few weeks off of running to fully recover and then will get back on a training plan. I want to see how low I can go...