June 01, 2010
I've been a bit lax on the posting and really have no excuse so my apologies if there is any one out there that looks forward to my musings.
First, I'm happy to report that Juli finished the Fargo Marathon in 4:22:23 so thank you to any of you that sent her good vibes. I spoke with her shortly after she finished and she said that she enjoyed herself and the crowd support was great. She hasn't even sworn off running another marathon but will probably need some coaxing. Actually, she recently told me she is considering doing a figure competition (what?!) so I think her energy might be focused on getting her body to look like this: 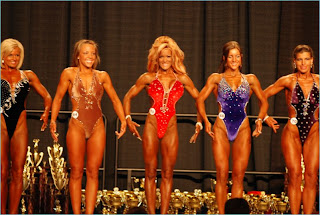 It is a little known fact that when female figure competitors stop their strict exercise, diet, hairspray and tanning regimen, they begin to look more like this: 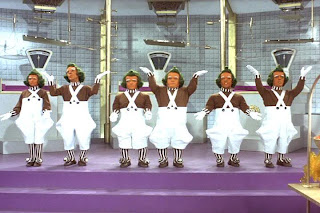 But anyway, more power to her, I guess. I'll stick with running.
On that note, I am happy to report that I am nearing 100% again with the hip/ass pain having subsided. I dropped my mileage substantially to what it had been prior to injury and cross-trained like mad. I am still planning on running Grandma's Marathon in about three weeks which means that while all of you were enjoying a long Memorial Day weekend, I was prepping for, completing, and recovering from my last long run.
I woke up at 4:30 on Sunday morning to eat a quick breakfast so I could be on the road by 5 before it got too hot out. There is something very peaceful about running so early that it almost makes me wish I was a morning person. The night before I drove my intended course to stash some water and Gatorade bottles so I could refill Nathan as needed and brought along two GUs.
After getting some of the kinks worked out in the first few miles, I settled in to a comfortable pace and set my mind to enjoying the next three hours. Toward the end my quads started to feel a little tight and I slowed my pace to prevent further injury. Apparently I slowed it too much because this guy passed me. 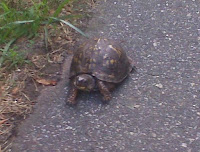 But I eventually finished and had the dreaded tangled ponytail. I think my head sweats an abnormal amount. I can literally wring out my hair when I'm done running. Is that weird? To give you an idea of how bad it really is, my hair is shoulder length and as you can see in the photo, it has knotted itself up to four inches. Lovely. 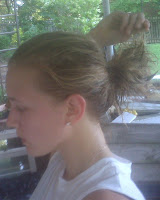 After showering, eating(!), and napping, I scrolled through the Garm on my Arm to check out my last long run stats. 20.23 miles/3:04:11/9:06 average pace.
So now it's taper time!
If you want to check out more hot photos of female body builders, I found that photo here. And the after photo here.