June 28, 2010
Remember this post about my goals? Goal number two was to place in a race and guess what? I DID!


The course for this run was essentially two loops around the lower portion of Henderson, meaning it was relatively flat. There were maybe 50 or so runners and another 50 walkers/mom's with strollers. I lined up a few rows behind the starting line (all the boys) and tried to size up my competition for the girls. There were some girls that looked pretty fast (long, lean, young) and I was watching them warm up, envisioning myself getting dominated.

To start the race, there was no gun, no horn, just some guy yelling "GO!" And off we went. My first mile was definitely too fast but I wanted to keep an eye on the girls that took off out of the gate. Soon enough they burned out and I passed them, trying to keep my pace as even as possible. It was extra incentive being the female front runner to keep my pace up. I didn't want to get passed by another girl or anyone. And I didn't.

By the second lap around the course I was definitely getting tired. I knew that unless I walked the rest of the way, I would have the new course record. The last 400 meters or so runs along main street which slopes ever so slightly downward. I used gravity to my advantage and crossed the line in 20:48.

I even got a cute little trophy. The guy at the top is a cabbage with legs (for Sauerkraut Days, duh). 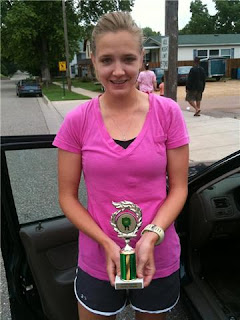 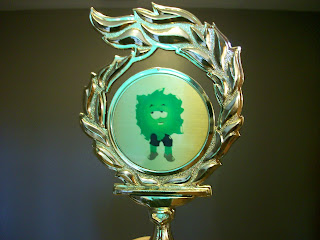 This race is technically a fun run meaning it wasn't chip timed so I don't know if I can technically count this as a 5k PR but I'm going to anyway. I haven't run a competitive 5k since April 2009 and my time then was 23:57. Massive improvement, no?

The best part of the race was after I was waiting around for the awards ceremony, the boys high school track coach came up and started talking to me, asking me where I was from and if I ran in high school. He said he could tell after I ran past him on the first loop that I was a runner. I don't know why this is so flattering to me but it pretty much made my day.

However, the big fail for the day was that I did not accomplish my 2a goal of wearing a costume. Just running shorts and a tank. Next year....