The Expo
I know that some people aren't huge fans of the expo but I love them! Free food. Free gifts. What more can you ask for? It's also a great place to pick up some fun running stuff, like this shirt by Sistas Shirts.

I thought it was pretty applicable.

It's also a great opportunity to learn about new organizations. Before I left for Duluth, I saw on the Grandma's Marathon Facebook page that Medals 4 Mettle would be at the expo. This organization collects medals from races and gives them to people fighting serious illnesses or that have debilitating handicaps. Their mission is really personal to me because of what my family experienced with Joel so I donated all of my medals from past races.

The highlight of the expo by far was hearing Kara Goucher speak. She is my favorite runner and I've been following her for quite a while. She was just as down to earth as I had hoped and so inspirational. And probably the cutest pregnant women ever... who still maintains 40 mile weeks at 6 months pregnant. 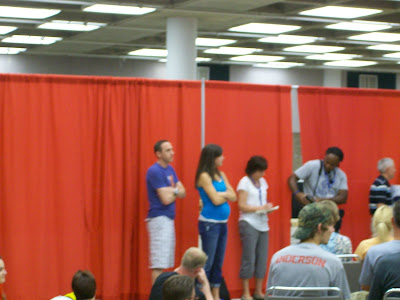 Kara is in the blue tank and her husband Adam (who is also an elite runner) is to the left.

And thanks to the wonders of social networking, I was able to meet up with a bunch of friends from dailymile. It was really fun to put a face with name. 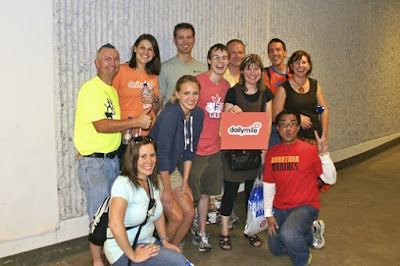 I sort of have a ritual that I do the night before big races and it mainly has to do with food. My biggest thing is to not try anything new and I also don't like to eat out because I like to know exactly what I'm eating. This is the only time I'm a picky eater! 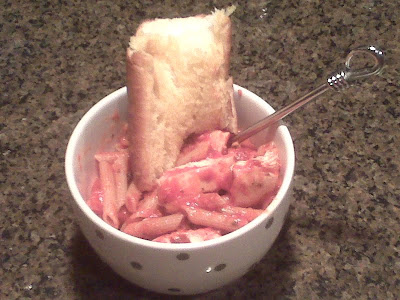 I made my typical pre race meal of whole wheat pasta with chicken and marinara sauce. And garlic bread of course.

Morning Of
I never sleep well the night before  a race. I think it's mostly anxiety and also a fear of oversleeping, despite the fact that I set like three alarms. I woke up at 4:30, showered, and forced down two pieces of toast with peanut butter and a half of banana. My mom helped me pin on this picture of Joel that I have. I've only worn it for the Twin Cities Marathon last year and just feel like it gives me extra motivation during the tough points. 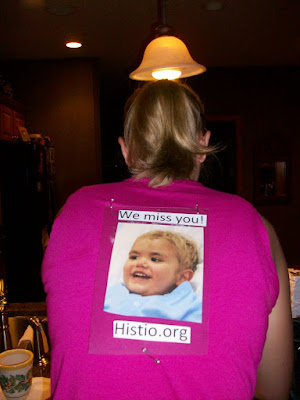 Because the race begins up in Two Harbors, all runners are asked to take buses to the start to avoid having 7500 cars trying to make it to the start line. They have pick-up spots all over the city so catching a bus is easy. I got on one of the first buses and left Duluth at 5:30.

It was a little cold that morning, mostly windy, so I wore a long sleeve over my tank. There were photographers at  the starting line and one snagged this photo of me right after we all got off the bus. 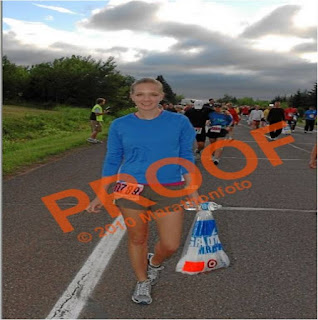 I knew a few people that were running, including my friend Shauna. I had spoken with her the night before and we said that we would look for each other at the start but didn't designate a meeting spot. When I first got there, I immediately got in line for a porta potty and lo and behold, Shauna was two people in front of me in the same line! A photographer snapped this photo of us. 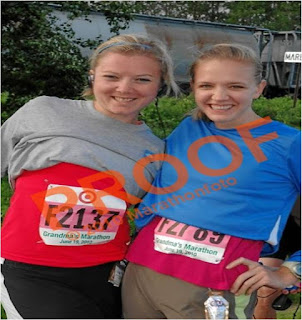 You can see my GUs that I pinned to my shorts.

The Race
The race was set to begin at 7:30 and did, more or less, minus the few minutes it took me to cross the start line. I positioned myself between the 3:50 and 3:40 pace groups since they did not have a 3:45 group. I knew that I wanted to negative split the race meaning that I would have to run a controlled (slow) first have and stick around an 8:30 pace.

I was running with the Garm on my Arm and had practiced locking the bezel during training runs by pushing the stop and start buttons simultaneously. However, my worst fear was realized when I accidentally stopped it 30 seconds into the race and panicked trying to get it back on. I didn't know exactly how much time I had lost but it also screwed up the auto-lap function a little since I had it set to tell me my pace every mile. C'est la vie.

This is when the race really started for me. I was feeling great, since I had been running so conservatively. I think I might have jumped the gun a little as you can see from my mile splits.

Mile 19 is when the race comes into the city of Duluth. The course is not really spectator heavy until that point and I think I got a little carried away by the crowds.

This is when the race got a little difficult for me. There was a really strong headwind and the majority of the time, I was alone with no one to block the wind. There is also the infamous Lemon Drop Hill

These miles were painful. I walked a few times and contemplated if I even wanted to finish (though I knew I would). The hardest part was knowing that I was going to be thisclose to a BQ and that if I didn't pick it up, I would regret it. And so I ran with burning quads and burning lungs. 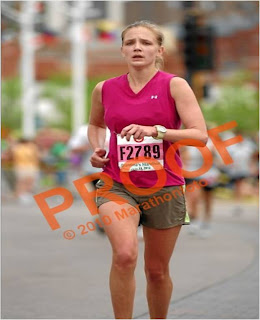 I knew as I rounded the last corner that I was within seconds of a BQ. Since I had accidentally stopped my watch at the beginning of the race, I didn't know how much time I had lost. So I put everything out there and ran. 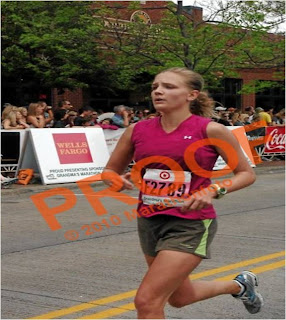 I crossed the finish line, tried not to collapse and tried to do some quick math in my head. When I stopped my the Garm on my Arm, it read 3:40:16. I didn't know how accurate that was and could only hope it hadn't been off by that much. I needed to be under 3:40:59 for a BQ. Drum roll......

After Effects
After grabbing some water and free food, I headed over to the family meeting area to find my mom and did some light stretching. I was covered in grimy sweat and Body Glide so after my mom came and did my best to give myself a towel bath. Here I am rocking calf recovery sleeves and toweling off. Cute, right? 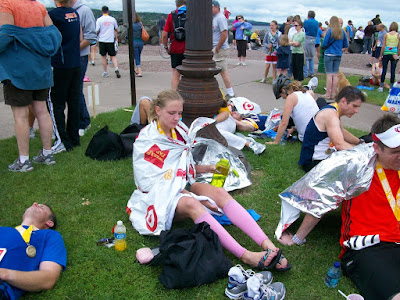 And this pretty much illustrates the exhausted glory of the marathon. And the top of my mom's finger. 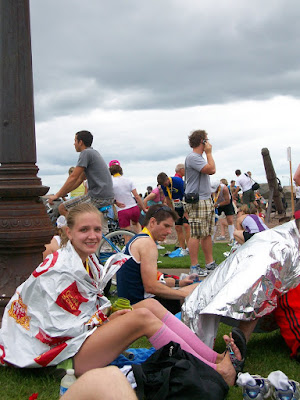 Aside from my burning quads, I felt pretty amazing. Shortly after this shot was taken, we walked about a mile to the car and I settled into the back for the four hour trip home. Not something I would typically do, but my mom needed to be back and it did give me the opportunity to sort of sleep.

So I did it. I ran a great race, I negative split it, and I qualified for Boston. Onward.


(ETA: Accidentally hit Publish before it was ready to go so apologies to those of you that are getting this twice!)
Joel race recap