May 12, 2010
You've probably guessed from the title of this post that I went ahead and ran the Half. No, I wasn't feeling much better and wasn't even entirely sure that I would be able to make it through the whole thing. But I did. Here's how it all went down.

I never sleep well the night before races. I think it's a mix of nerves and paranoia that I'll somehow sleep through my two alarms so I was awake long before my planned 5:30 wakeup. I immediately started my pre-race ritual of making coffee and having a small breakfast (an English muffin with pb), took a hot shower, and spent some time on the foam roller.

Getting dressed proved to be a challenge as well. The weather report said the temperature at 8am would be 38 degrees with a wind out of the north at 16mph. Yikes! I had been planning on running in shorts and a long sleeve but decided to whip on my tights at the last minute. I am SO glad I did!

I went to the race by myself since it was miserably cold and the course wasn't very conducive to spectators anyway. I parked a few blocks away and did a slow jog to the start area. There were a lot of people milling about so I put on my race number, found the bathrooms to take my last-minute nervous poop, stripped off my sweats, checked my bag, and found my way to the starting line. The MN Pacers were there and I saw the groups for 1:50 and 1:45. I really wanted to run with the 1:45 group and go for a PR but since I wasn't feeling that great and the weather conditions were sub-par, I settled in near the 1:50 group.

Soon enough we were running. The guy leading our pace team was all about talking to the group (e.g. "When I say mile, you say one! Mile! etc, etc). I knew about a mile and a half into it that there was no way I could listen to this the whole time and set my eyes on the next pace group in the distance.

As I began to pull away, Pacer Guy of course had to comment on it. "It's still early and some of you are starting to pull away! We have a lot of race left!" That only pushed me on. Already my hip was starting to hurt and I began to worry how I would get through the next 11 miles. Should I slow down and stick with Pacer Guy? Should I quit now?

I had a conversation with a friend of mine the night before who said "There are always a million reasons not to do something." Right now there were a million reasons for me to stop and I knew it. I also knew it was decision time: I resolved right then and there to not worry about the next mile and just concentrate on the one I was on. Don't think, just run became my mantra and whenever I started to worry about what was coming, I repeated this to myself.

The course moved out of New Prague and into the country and its rolling hills. Around mile 4 we turned to head south and the wind was finally at our backs. There were a few gradual climbs but what goes up must come down. I did my best to keep a steady effort on the inclines and use gravity to my advantage on the downhills. The most substantial drop came right after the half-way point and I used it to my full advantage. However, we had also changed direction again and I was being sideswiped by the wind which posed an interesting challenge.

There was some much needed crowd support at Mile 8 and I also ate two Clif Shot Bloks.

We again turned another corner and this time we were running straight into the wind. My hip pain had sort of leveled off to a constant dull ache and with the wind working against me, I didn't know how I was going to finish at the pace I w 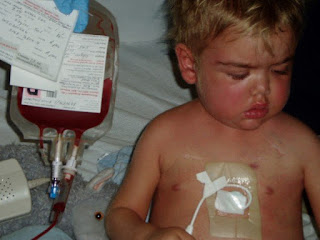 as keeping. I knew that the next few miles would be mostly mental and that if I could just get to Mile 11, adrenaline would take over and I'd finish. So I started to think about what I always think about when things get hard: Joel. Since he spent so much of his life in a hospital bed, he didn't develop physically like other kids his age. He did learn to crawl and walk but it was much harder for him. I thought about the nights that I spent next to him on a cot in his room, when he would wake up and say "Na, ow. Rub." and point to his legs. ("Na" is what he called me.)


At the 12 mile marker there was a pretty decent downhill that brought us back into the city of New Prague. I wanted to leave everything out there on there on the course. So I ran. Hard. My legs were screaming, my hip felt like it was going to pop out of the socket, but I ran.


And that was it. They cut my chip off my shoe and I chatted with some people I knew at the finish line. And then I tried to walk. It hurt. Bad.


So since Saturday, I have not run a step. I've biked, taken ibuprofen and arnica, iced, foam rolled, rested, compressed and walk around my house in this: 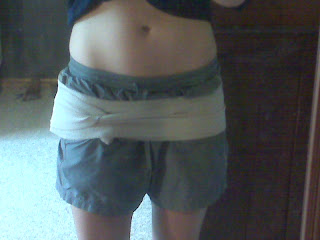