April 19, 2010
These past few days have been crazy! It began on Thursday with baking nearly 400 cupcakes (more on that later) and my weekend activities included my first trail race, frosting and decorating the aforementioned cupcakes, a baby shower and the beginning pains of plantar fasciitis.

Now on to the race details. For the Trail Mix race series in Bloomington, I was part of an all women's team for the 50k team event. We all start together and run a 12.5k (7.75 miles) loop. Our individual times are added together for our final score.
A friend of my mom's, Cheryl, asked me to run with her and her sister, Laurie, and her friend Melanie. I had never run a trail race before and the website didn't show a course map or elevation chart. Because I didn't really know what to expect- and started to have pain in my heel- I set a tentative goal of an 8:20 pace. Here we are pre-race: 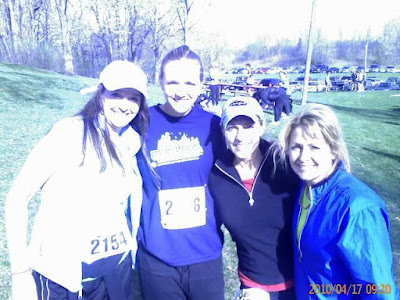 We arrived up there around 8:30, an hour before the race started. It was perfect running weather. The runners participating in the 50k and 25k solo events had already started their respective races on the same loop as what we were about to run on so the start of the race was a little interesting since we couldn't start on the actual course. All of the runners sort of gathered on a hillside near the start/finish line and someone on a loudspeaker just yelled "GO" and we were off. I forgot to start the Garm on my Arm and it took me about 15 seconds to get it going.
The course was a mix of woodchip trails, grass/mud, and pavement. However, there were HILLS along the majority of it. Most of them were pretty short and steep so I just concentrated on getting up, knowing that a downhill awaited me on the other side. I felt pretty good but I felt that I was pushing the pace a little. I just told myself to keep going and I'd worry about slowing down when I hit a wall.
Around 4 miles I settled in to a group of three that seemed to be keeping a quick pace. Then we hit a BIG hill. This one was long and steep. I knew I just needed to get up so I took one look at the top, put my head down, and trucked on up, leaving the group behind me. Staying in front of them became my motivation to keep my pace.
Soon after I could hear cheering at the finish line across a lake and I just wanted to get there. I picked up the pace slightly and crossed the finish line in 1:01:47 (my official finishing time).
According to Garm, my average pace was 8:11 and since I started it a little bit late, it showed total mileage as 7.51. I definitely didn't start it a quarter mile after the start so either the course measurements were off or I am really good at running tangents. The official results had me pegged at a 7:59 pace. Either way, I surpassed my goal.
Out of the 19 all-women teams, our team finished 9th. Each of us succeed in the goals we had set for ourselves and had a great time.
Now that the race is over, I'm taking three days off from running to try to prevent any further damage to my heel. Today was my second day off and I'm going a little bit crazy already. Cross training just isn't the same.
I'll write about my Cupcake Baking Extravaganza later this week.
Happy running!
race recap