April 20, 2010
A few weeks ago, my mom asked me if I would bake red velvet cupcakes for a wedding as a favor to a couple at her church. The guest list was small, probably around 100 people, she thought. I have only recently begun baking and have been on sort of a cupcake kick so I agreed. It was the least I could do in my unemployed state.

Then the guest list grew. To like 300. The couple decided to invite the entire church. However, people weren't RSVPing so a week before the wedding, they started to make phone calls asking for responses. They had a tentative list of 180 people with 40 people that "might show up." Yikes.
So Thursday evening I loaded up my car with all the ingredients and supplies that I would need to make roughly 400 cupcakes and headed off to use the church's enormous kitchen. After pre-heating the ovens, a feat in itself since none of them actually heated to the correct temperature, I began measuring and mixing and pouring and baking and cooling and tasting. Luckily my mom stopped in to help me for a few hours and it made things go by a little quicker. 250 cupcakes later, we called it a night. 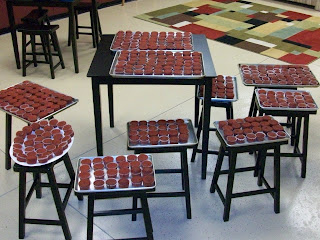 some of the cupcakes

Friday morning I agreed to be an extra set of hands at a conference a girlfriend of mine was coordinating so I had to be up at 5am. I finished up helping around noon and immediately headed back to the church kitchen to finish up the cupcakes and make the frosting. Cream cheese frosting (i.e. cream cheese, butter, sugar). Yum.

That night I went home a little early to get all my gear together for the Trail Mix race the next morning. After the race, I literally cooled down for 10 minutes, hopped back in my car for my hour drive home, rinsed off in the shower and threw sweats on so I could go back to the church to decorate the cupcakes for the wedding that started in 3 hours.

So I frosted. And frosted. Then my sister Whitney came to help and we frosted together. And then my step-dad Dave came and we all frosted. And frosted. 379 cupcakes in total. Whitney and Dave were actually going to the ceremony so they took off after an hour and a half but I kept on frosting. No sooner had I frosted the last one that someone that had peeked into the ceremony told me that there were maybe 120 people in there. Not 180, not 220. 120. Ugh.

I ended up decorating all of them just in case people decided to eat 2 or 3 of them and got them out on the table in the reception hall, cleaned up and loaded my car up just in time to see the bride and groom exit the church. Their smiles made it all worth while.

Here's a shot of the finished goods: 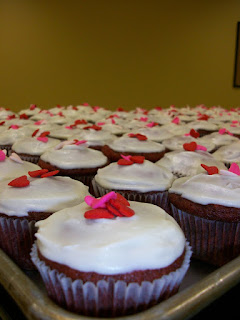 When it was all said and done, there were 130 people at the reception. Translation: Lots o' leftovers! The church offers a free meal during the week so they kept them to use there. I think it will be a while before I bake any more cupcakes.
In running news, this is my third and final day of my running hiatus and I couldn't be more excited to get back to it. My heel still hurts a little but I've been icing and stretching. I'm planning on taking it easy the remainder of the week to make sure that I'm good to go. The last thing I want is a chronic injury. I also gave my precious Garm to my sister to use for the rest of her Fargo Marathon training. It will now be the Garm on her Arm.
Congrats to all Boston runners, especially Rachel over at The Pulse Fitness Studio. She ran yesterday and was back leading strength class this morning! Way to go, Rachel!
food